Written by Let It Grow

Design/Build is back at Let It Grow and we are excited to share our story at the Octagon!

Located at the northern end of Roosevelt Island, the Octagon is a landscape rich in history and constantly transforming, dating back to 1834.  Designed by Alexander Jackson Davis, the Octagon served as the main entrance for the New York Pauper Lunatic Asylum, open from 1841 to 1894.  Charles Dickens toured and wrote about the asylum in 1824.  The Asylum became a municipal hospital and was renamed the Metropolitan Hospital in 1895.  The Metropolitan Hospital School of Nursing opened their doors in 1902.  The Hospital treated survivors of the Titanic and later closed their doors in the late 1950’s.  After decades of decay, the two original wings that jetted off the Octagon were demolished in the 1970’s and fires in 1982 and 1999 left the Octagon lying in ruins until 2006 when the Octagon was restored into a luxury apartment building by Becker and Becker Associates.  The apartment building featured a 25,000 square foot rooftop terrace and an adjacent public park component. 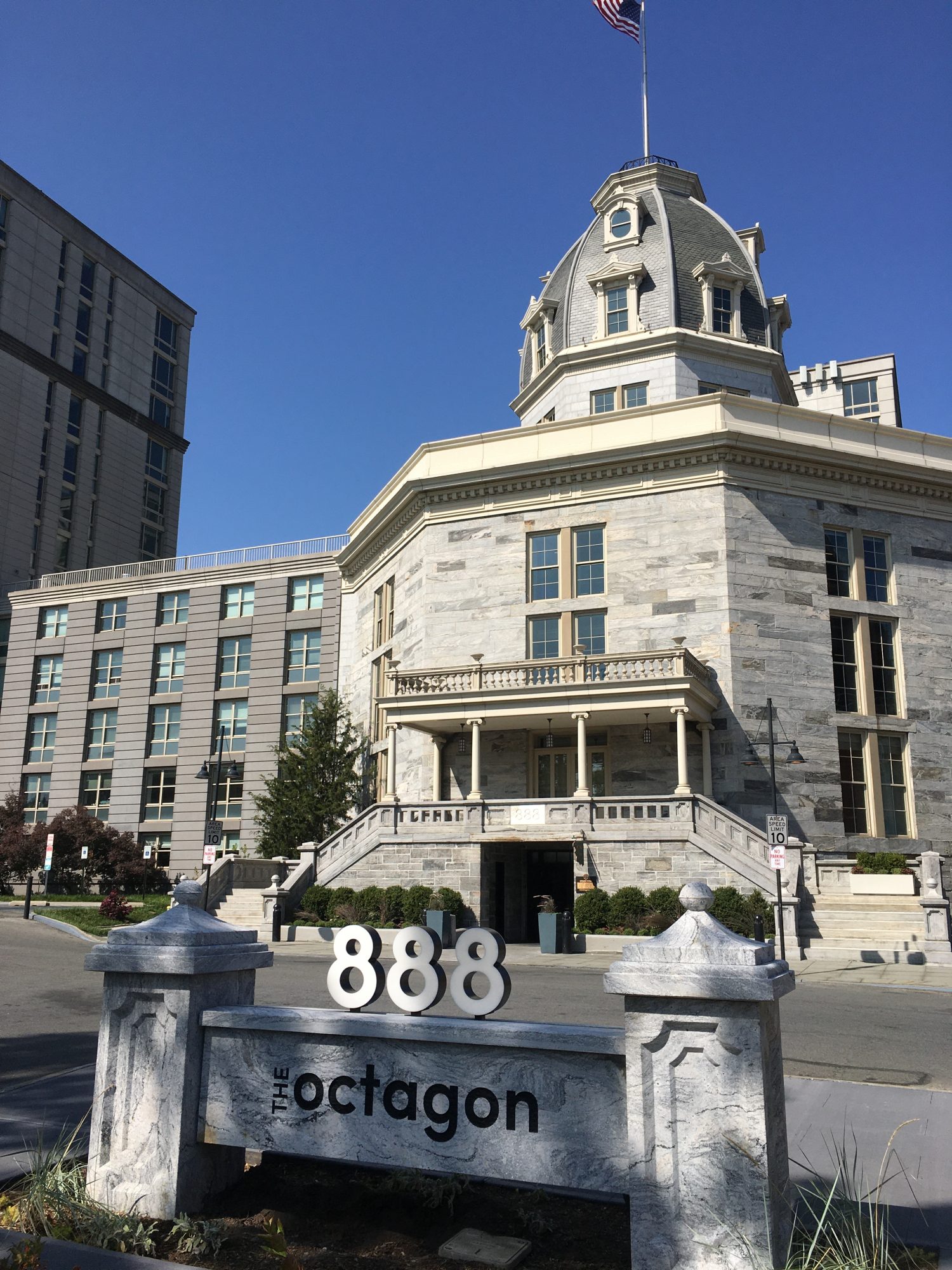 In the case of Let It Grow and the Octagon, history does have a way of repeating itself.  In 2018 when Let It Grow was bidding on the replacement of the rooftop terrace designed by others,  we were surprised to find out that our very own Landscape Architect, Steven Laudati, was part of the original Landscape Architecture design team at Langan that worked on the Octagon from 2002 to 2006.  When the project came in over budget, the Owner, Bental Green Oak, was looking for options to redesign the rooftop terrace within their capital improvement budget.

Design/Build was the most effective method to deliver the project on schedule and within budget.  The Octagon had special meaning to Steven and he was more than excited to jump into redesigning a project he designed more than a decade earlier.  Let it Grow worked closely with the Owner’s representative, Edifice Realty and property manager Bozzuto Management, to develop conceptual designs that would expand the existing rooftop programming and refresh the landscape.

The main vision of the project was to create a more attractive and usable outdoor space for the Octagon community.  The existing landscape planting had deteriorated over the years and was in need of replacement.  All that was left was large expanses of groundcover, natural turf and a few trees.  More importantly, outdoor programming of the rooftop was essential to compete with the New York CIty rental market amenity spaces and attract new residents to the community.  Other drivers behind the project investment was the need to repair the perimeter of the rooftop waterproofing that had been compromised and renovate the existing in-ground pool. 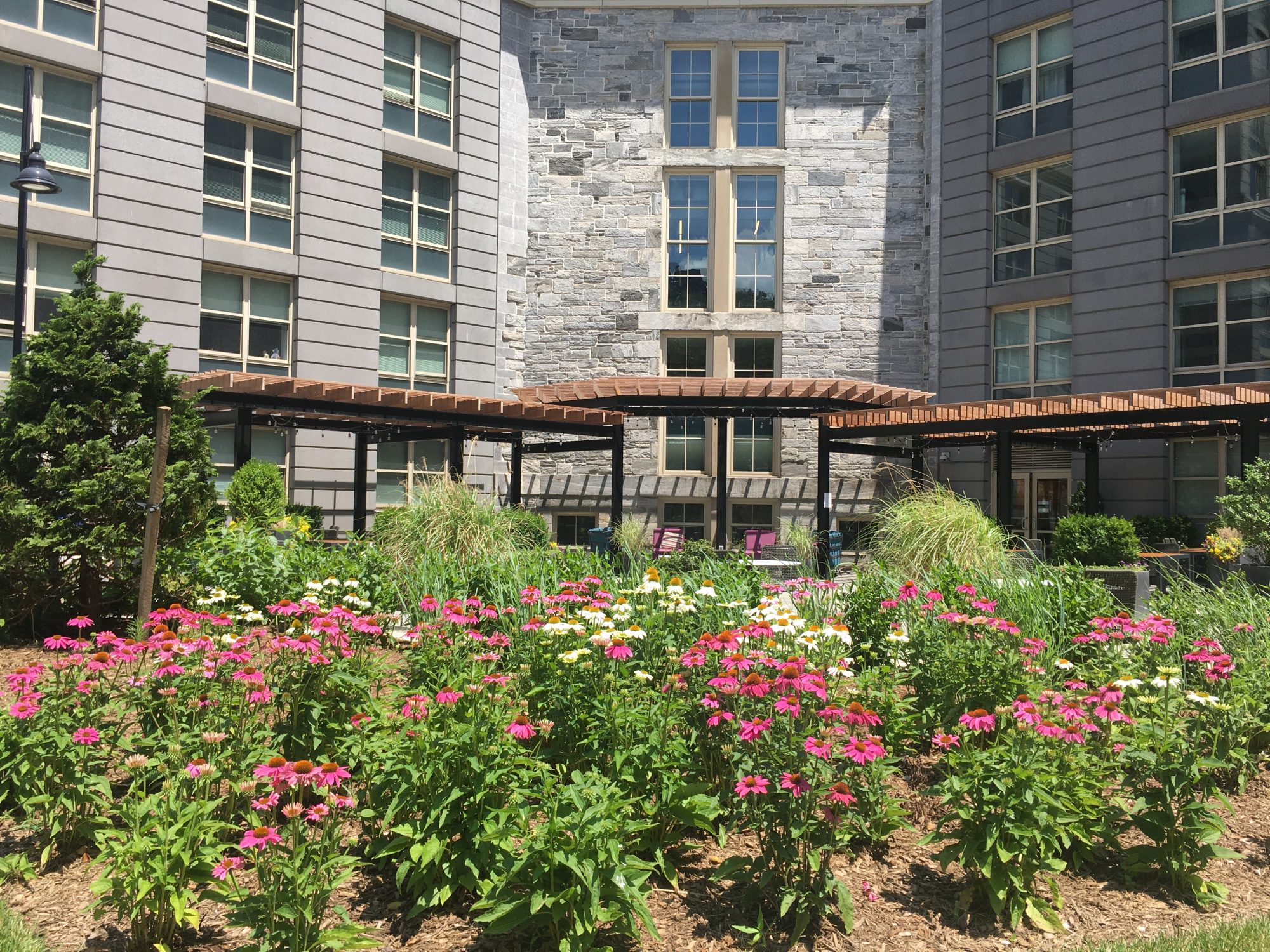 The new landscape was designed to respect and integrate with the existing site architecture and rooftop layout to fit seamlessly.   Two main design elements were introduced to create programmed outdoor spaces, provide scale and more privacy across the roof terrace and focal points.  They included a 1,200 square foot raised IPE wood deck projecting over the existing roof edge toward the adjacent public park and a custom designed pergola structure nestled against the Octagon.  The deck serves as a promontory offering views into the park, East River and Manhattan skyline beyond.  Besides offering new outdoor lounging opportunities, the deck also created a secondary lawn area for smaller gathering and games.  The new walkway leading to the deck included an intimate seating node and gas fire pit.

The pergola introduced scale to the large paved courtyard creating many seating opportunities and much needed shade.  The symmetrical layout of the pergola embraced the geometry of the Octagon, consisting of  three sections, with the center section at a raised prominent height.  The structure was constructed with steel I-beams and IPE joists for a more traditional look to not distract from the historic Octagon.  Adjacent to the pergola were new outdoor grilling stations integrated with the existing seatwalls.  The grilling stations utilized the existing seatwall veneer and featured granite countertops. 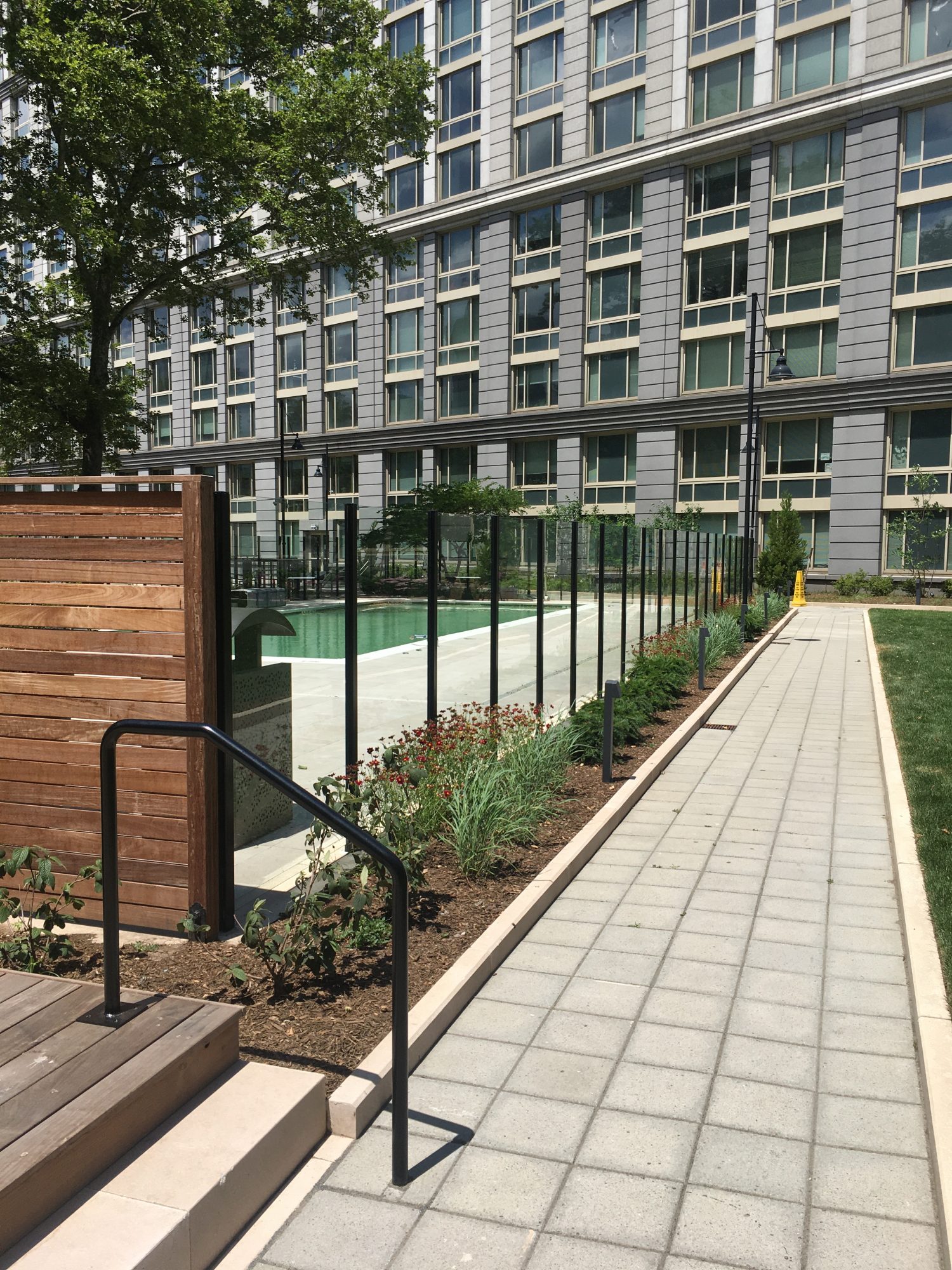 The pool area was another area of significant upgrades and restoration.  Existing concrete pavers were replaced with porcelain tiles and the existing wire grid fence was replaced with clear glass for a more open appearance and to maximize views into the park and City skyline above.  The pool basin was fully restored and a new pool heater was installed to extend the pool season.  An IPE fence was designed to separate the pool area from the new deck and establish a higher level of privacy between the outdoor roof spaces.

All of the existing planting was removed, including the lawn.  Additional horticultural soils were installed to raise planting bed and turf grades that had settled over time.  The monolithic expanse of Liriope groundcover was replaced with a new palette of plant material was introduced to provide seasonal interest including ornamental trees, ornamental grasses, perennials, shrubs and evergreen trees.

Let It Grow also designed the new site lighting for the roof terrace.  Existing post top lights were retrofitted with new LED to increase light levels and provide better color rendering for an increased sense of security.  These light fixtures were supplemented with a family of other luminaires including landscape bollards, landscape uplights, linear lighting at step treads and guardrails, and festive lights at the pergola.

The project also included a new monument entry stone signage at the front entrance to the Octagon as a place making effort and better establish the front entrance.  A granite was selected to match the existing granite at the Octagon. The signage piers were also designed to carry the vocabulary of the historic stair piers into the landscape.  The signage features the 888 address marker prominently at the top of the sign. 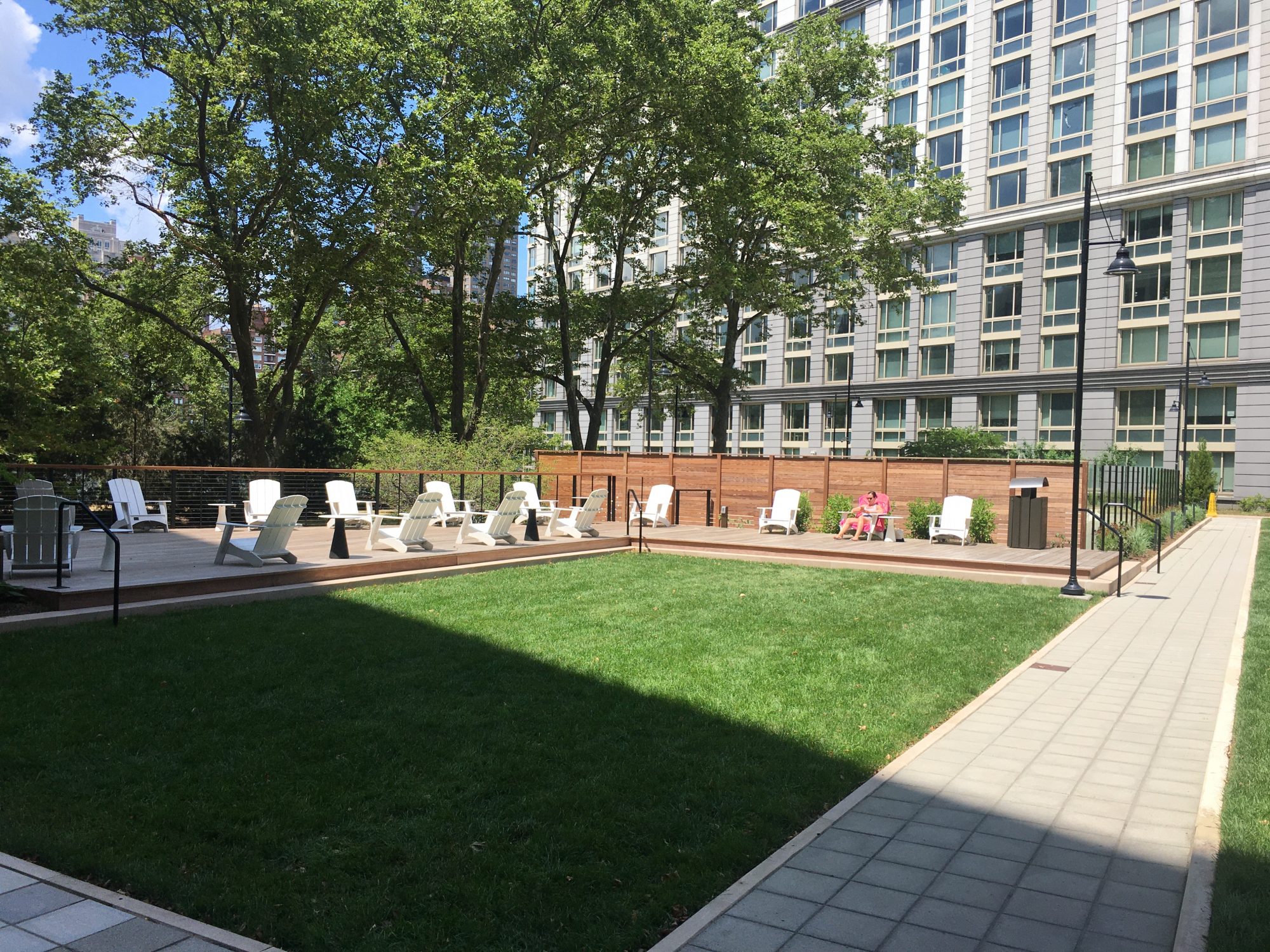 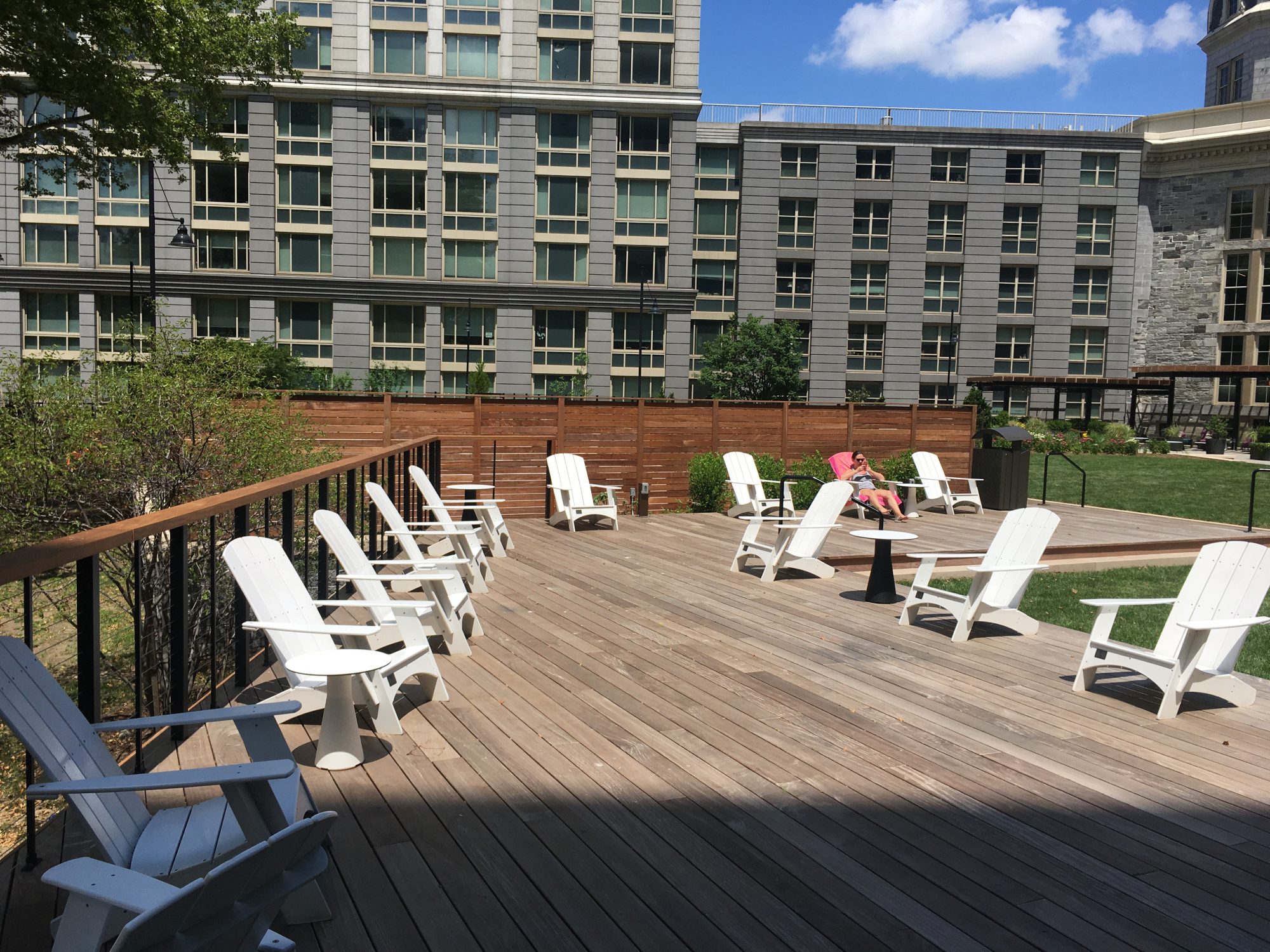 The project later expanded to capture other capital improvements including drainage improvements outside the daycare center and structural repairs to the historic Octagon main entrance stairs.  As a general contractor with inhouse multi-trade capabilities Let It Grow was able to effectively build the project and serve as one point of contact for the Owner from conceptual design thru construction.  Our Landscape Architects worked closely with the Owner’s representative, consultants and building management to ensure the design vision was achieved with a high quality of workmanship with minimal impacts to the quality of life for the residents during construction.  Our design/build approach offered the advantage of having our Landscape Architect highly involved in construction with the ability to implement design solutions with minimal cost to the project.

Even though construction on the project was shut down for a few months due to Covid-19 restrictions, Let It Grow fast tracked the remaining construction during the summer and proudly completed construction in September 2020.

Our design team also redesigned the landscape planting on the north and east sides of the Octagon to carry the planting vocabulary around the building.  Our landscape management team is in the final stages of completing the planting this fall and continues to maintain the property.  We would like to thank the entire project team and all stakeholders for this opportunity to be part of the Octagon evolution.

Back to all community